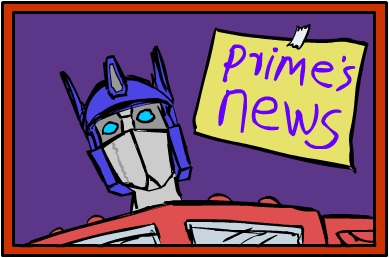 A few weeks ago tragedy struck the Autobot headquarters. Ol' Kup, our most wisest comrade, had to be deactivated. It was a sad day for all, but it was his time. To add insult to injury, Cliffjumper's toys were stolen! It seems the little scamp had put his entire collection of "Battlestar Galactica" Mego dolls in a large pile in front of the Ark with a sign that read "Dear Santa, I want more of THESE!" The next day, his prized astronaut dolls were gone!

Well, I called up my good buddy Santa right away and shared the dilemma. He informed me that his elves had discontinued the "Battlestar Galactica" line due to lack of interest. I replied that he must not have seen the scintillating new mini-series on the Sci-Fi Network! He said no he hadn't, that he didn't have time for the television show in the 1970s, and he certainly doesn't have time for a spin-off miniseries that extends the franchise now, and finally that the whole conversation was moot since the elves stopped making Mego dolls years ago. (Oh that Santa, the king of logic!)

Autobot detectives Prowl, Red Alert and Perceptor were put on the case, but to no avail. (However, they did solve the mystery of who ate the Christmas goose. Turns out it was a wolf. Yes, yes, a wolf.)

Then, gentle readers, a true Christmas miracle occured. That night, as we were all tucked away in our beds, the ghost of ol' Kup appeared to me in a dream! He was covered in heavy chains and wailing away about three spirits visiting me later in the night. Well, I'm not easily spooked, but the spectral image of a Bot I had recently deactivated had me screaming like a British child without his pudding on Christmas morning. Just then, Brawn rushed in to see what the clamor was. Lo and behold, he was clutching Cliffjumper's Mego dolls! Seems ol' Brawn has a soft spot for the adventures of Lt. Starbuck et. al and pilfered the delightful toys under the shadow of night. Well, we all had a good laugh at Brawn's expense that night. Brawn actually broke down into tears, going on and on about being afraid of the dark and needing his outerspace heroes to protect him from the evil Cylons! Some tough guy!

So, Christmas was saved, at least in terms of finding the thirty-year old doll collection that Cliffjumper already owned. And we all enjoyed a Christmas pizza instead of the goose. (Darn that wolf!) Oh, and I was visited by three spirits, but they just told me the location of Vector Sigma, which I already knew.

On the comic front, be sure to pre-order our newest adventure "TransSpoof: The 1980s Special," available in the new year. It's a rip-roaring parody-riffic adventure set in the halycon days of the 1980s.

See YOU in the new year!